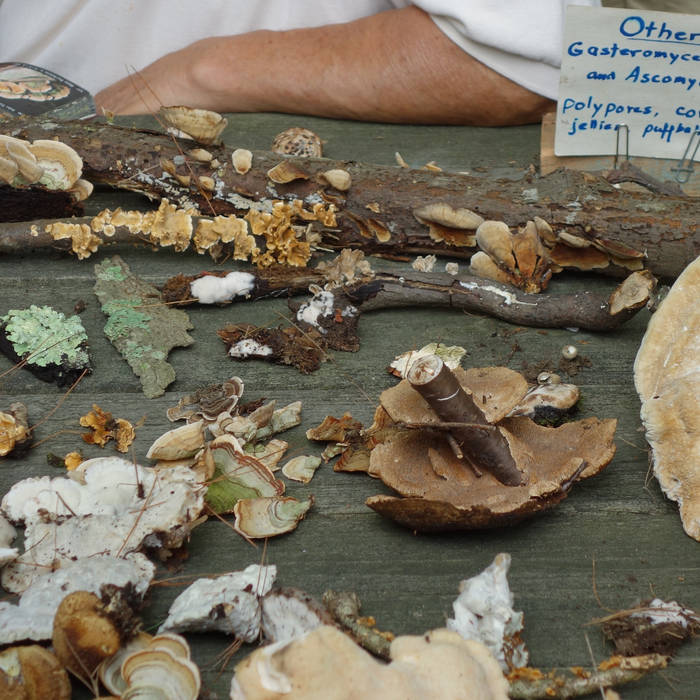 'Mycological' is an audio piece which takes as its subject certain aspects of human encounters with fungi.  Fungi were once thought of as kinds of plants but are now categorized as their own kingdom, which also includes yeast and molds.  Genetically more similar to animals than to plants, fungi nearly always coexist in symbiotic, mycorrhizal relationships with other life forms and thus index above all interconnectedness.  The field of mycology is one of four scientific disciplines (the others being archaeology, astronomy, and ornithology) where amateurs contribute significantly to the development of the field, which in mycology means in terms of collecting specimens and the contextual ecological data which is necessary in order for the collections to have scientific value. Amateur mycology in the US goes back to the late 1800s, when it was a subfield of amateur botany, and clubs were formed in many American cities. The Boston Mycological Club (BMC), founded in 1895, is the longest running such club, with a growing active membership.  While members often join initially out of a desire to safely forage for wild mushrooms, many develop fascinations which go far beyond the edible fruiting bodies, to the ecological and morphological aspects of fungi more generally.

This sound piece is thus multi-sited and composed in three parts. It begins in a lab at Harvard with DNA analysis, using polymerase chain reaction (PCR), a method invented in California in 1983 which has revolutionized the study of mycology and of evolution more generally, of "amplifying" a particular region of DNA, in order to compare it to others in a databank and thereby determine species. A cart is trundled down a corridor leading to the sterilizing autoclave machine; a researcher dissolves pellets in liquid using a vortex stirring machine. Next, the Farlow Herbarium -- a space where the efforts of professionals and amateurs overlap -- contains collections of fungi dating back to the mid-1800s, catalogued and kept in folded paper with precise handwriting detailing the contents. A mycologist working on a particular species represented in the collections carefully repackages these specimens in acid-free, archival paper, rewriting in pencil the currently-accepted Latin classifications. Finally, on a Sunday foray of the Boston Mycological Club, a senior member discusses the notion of the edge habitat, and at the annual Cape Cod Foray, participants examine several species of the genus Rhizopogon.

Bandcamp Daily  your guide to the world of Bandcamp