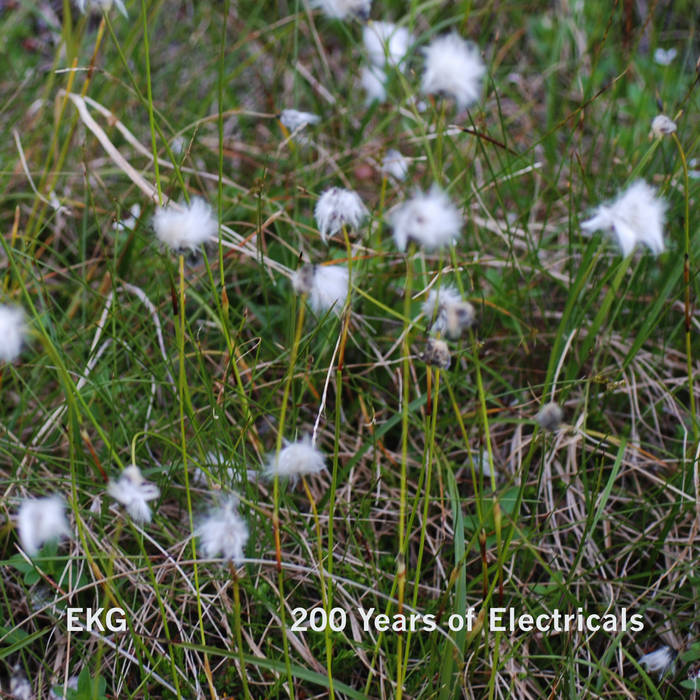 200 Years of Electricals is EKG's first new full release in more than a decade. It expands upon their patient, long-standing methodology (forged near the end of the previous millennium, during the subterranean heyday of "eai"), incorporating elements of the artists' individual development over the intervening years. In that time Karel's work has moved in the direction of reality-based audio and experimental nonfiction cinema, while Bruckmann dives ever deeper into the awkward liminal space between contemporary "classical" concert music and the experimental underground as an oboist and composer.

EKG is the collaborative electroacoustic duo of Ernst Karel and Kyle Bruckmann. The music is situated between acoustic and electronic, improvised and premeditated, disruptive and meditative; it crackles and hums with precariously restrained potential energy. Combining winds with anachronistic electronic processing, EKG carefully sculpts a bizarre yet organic soundworld of shifting tones, sudden and creeping textures, elusive suggestions of possible melody, and microscopic noise.

Formed in the hotbed of Chicago’s mid-90s experimental music community, EKG has slowly, quietly, continued sporadic work as Ernst and Kyle have drifted apart across the continent (and, for one short period, the Atlantic Ocean); they now reside again in close proximity, in the San Francisco Bay Area. The duo previously released four full-length albums on another timbre, Formed, Sedimental, and Locust Music, following their debut EP on Crank Satori. Notable performances have included the 2013 San Francisco Electronic Music Festival, the Crow with No Mouth Series (Minneapolis/St. Paul), Bowerbird (Philadelphia), the Stone (NYC), and Non-Event (Boston). Their music has appeared in such video/film works as Rebecca Baron’s "Detour de Force" and Brett Story’s "The Prison in 12 Landscapes."

recorded Aug-Sept 2013 in St. Paul and Oakland
(special thanks to Jesse Goin/crow with no mouth in St. Paul)
mixed and edited 2017-2018, Oakland and Cambridge
mastered 2020, M. Azevedo, Providence

Bandcamp Daily  your guide to the world of Bandcamp